14 of the Best (and Most Offbeat) Attractions in New York! 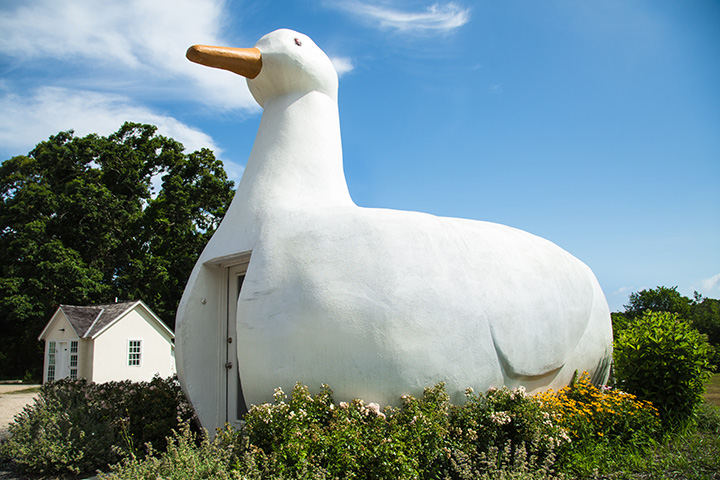 You probably know of New York’s famous attractions—the Statue of Liberty, Niagara Falls, and the Brooklyn Bridge are just a few that come to mind. But visitors and residents alike can enjoy a variety of lesser-known sights and activities that are totally unique. From the world’s largest kaleidoscope to a museum dedicated entirely to JELL-O, here are 14 of the most unusual attractions in New York State.

Every year around Halloween, Croton-on-Hudson hosts the Great Jack O’Lantern Blaze, a collection of 7,000 gorgeous jack-o-lanterns. The glowing gourds are arranged into different shapes, like a grandfather clock, a spooky dragon, and a massive “Pumpkin Zee Bridge.”

Long Island’s funkiest attraction is a duck-shaped building made of concrete. Built in 1931 by a Riverhead duck farmer, the Big Duck was created to sell duck eggs and products and immediately became a tourist sensation. It was added to the National Register of Historic Places in 1997.

Formerly known as the “World’s Greatest Hoax,” this 10-foot tall gypsum statue was created to look like a petrified giant in the 1800s. The Cardiff Giant shocked and fooled the entire country, with people coming from miles around just to see it. Once the giant was exposed as a hoax, it was sold to the Farmer’s Museum in Cooperstown, where you can view it today.

Fairytales live large at Magic Forest, a storybook-themed amusement park near Lake George. The park has an eerie quality to it, with the world’s tallest statue of Uncle Sam featured alongside Santa Claus and the three little pigs, all in the middle of the woods.

Designed in the 1960s by psychedelic artist Isaac Abrams, the world’s largest kaleidoscope is a 56-foot-tall converted grain silo in Mt. Tremper. Kaatskill Kaleidoscope features two shows—the regular “America, The House We Live In” and a holiday spectacle.

Have you ever wondered how JELL-O became so popular? Learn all about it at Le Roy’s JELL-O Gallery Museum, which showcases colorful vintage advertisements, memorabilia, and JELL-O-themed keepsakes to remember “America’s most famous dessert” by.

The second-most-visited natural attraction in New York behind Niagara Falls, Howe Caverns is a magnificent underground cave that dates back millions of years. Visitors can take a 90-minute tour that includes a boat ride on the cave’s beautiful Lake of Venus, or the Signature Rock Discover Tour, where they can explore off-the-beaten-path sections that had been closed for 100 years until 2015.

Wing’s Castle is the private home and nearly 40-year pet project of artists Peter and Toni Ann Wing. Located in Millbrook, this eclectic castle is a true spectacle, made of salvaged materials and treated as the couple’s evolving art project over the years. It recently became a bed and breakfast so visitors can stay there overnight.

Grand Central Terminal is a popular tourist attraction, but few passersby know about the whispering gallery. This large archway in front of Oyster Bar is a whispering wall—stand at one corner while a friend stands at the opposite corner of the arch. Whatever you whisper will be heard by the person on the other side!

A small waterfall in Chestnut Ridge Park is home to a phenomenon that has baffled scientists—a natural “eternal” flame. A grotto underneath the falls emits natural gas, which lights on fire and casts a mystical glow. From time to time, the flame is extinguished, but the gas can be easily re-lit.

Visitors can actually drive up Whiteface Mountain between May and October. Take the Veterans Memorial Highway up to Whiteface Castle, which rests at an elevation of 4,600 feet. After that, climbers have a choice: Either take the castle’s elevator or climb gorgeous stone steps to the peak.

In 1972, the town of Perinton became home to one of the world’s weirdest homes. The Mushroom House is a three-bedroom house shaped like mushrooms. Each mushroom “pod” sits on top of a 14-20 foot concrete “stem,” creating a treehouse-like feeling when you’re inside.

Seneca Falls has long been thought to be the inspiration behind Bedford Falls, the town in the Christmas classic “It’s a Wonderful Life.” Opened in 2010, this museum contains a collection of memorabilia and rare artifacts contributed by the film’s own cast.

Erosion from Lake Ontario creates dramatic clay bluffs on the coast of Wolcott, New York. These clay pinnacles lend a windswept, otherworldly appearance to the landscape. The Chimney Bluffs are the most-visited bluffs on Lake Ontario.