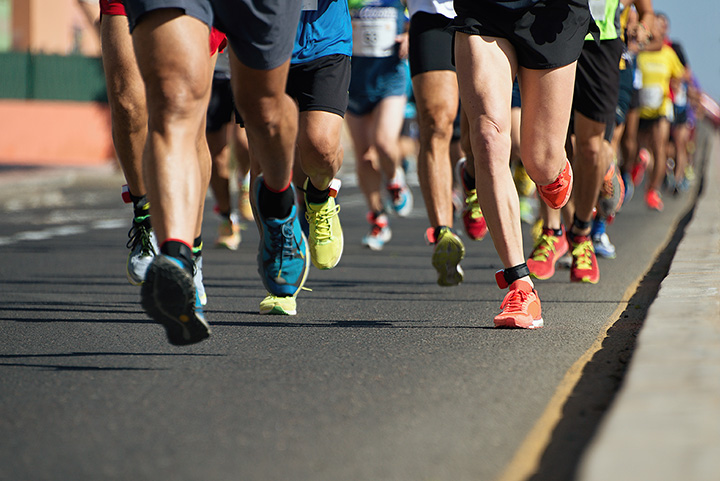 Whether you're meeting a personal goal, qualifying for a big marathon, or simply getting that runner’s high, there’s nothing like the accomplishment of a road race. And, with gorgeous views and an extremely diverse terrain, New York State is a veritable runner’s paradise. With race-day backdrops from the Adirondack Mountains to the beaches of the Hamptons, here are the 10 best road races in New York.

This 13.1-mile half marathon race weaves along the coast of New York City’s Staten Island. The spectator-friendly race begins and ends at FDR Beach, with spectacular views of the Atlantic Ocean and the Verrazano Bridge.

A qualifier for the Boston Marathon, this East Hampton and Southampton road race sells out every single year. Runners follow a winding route that includes beachfront running and wooded roads with plenty of fall foliage.

Every year in spring, Ithaca hosts the popular Skunk Cabbage Classic. The race begins and ends on Cornell University’s campus, following a route that winds past barns, livestock, and, of course—the famous and aromatic skunk cabbage.

Runners training for the New York City Marathon take on this October road race as one last opportunity to train for the big one. The gorgeous route loops through the town of Rhinebeck and traces the shore of the Hudson in neighboring Rhinecliff.

This intense ultramarathon boasts some spectacular Finger Lakes scenery. Tracing the hilly terrain around Lake Canandaigua, seasoned athletes complete either a 50-kilometer or a 50-mile route to the finish line.

With fall foliage and runners from around the world, this Syracuse road race is a Boston Marathon qualifier and takes place a month before the NYC Marathon. The route is flat, fast, and spectator-friendly, and you get a beer when you finish.

With over 90,000 applicants and millions of sidelines and television spectators, New York’s premier road race is a model for city marathons around the globe. The race starts in Staten Island and travels though Brooklyn, Queens, and the Bronx before finishing in Central Park.

The Lake Placid Classic is a 10K and a half marathon that takes place amidst some of the most striking sights in New York. The road race begins at the Olympic Skating Oval in downtown Lake Placid and passes various Olympic structures and Adirondack viewpoints along the way.

Selling out every year since its inception, this six-year-old race is already a favorite among marathon runners. The race route traces picturesque Prospect Park—Brooklyn’s answer to Central Park—six times, with three half-loops.

This Boston Marathon qualifier is the only race in the world to start in one country and finish in another. Marathon runners begin at Buffalo’s Albright-Knox Art Gallery and cross the U.S.-Canada Peace Bridge to finish on the Canadian side of Niagara Falls.

V-Day Half Marathon And 5k

10:00 AM
Kings Park, NY
Learn More
Show More
Select a New York town to find
the Best Things-To-Do and Places To Go around you