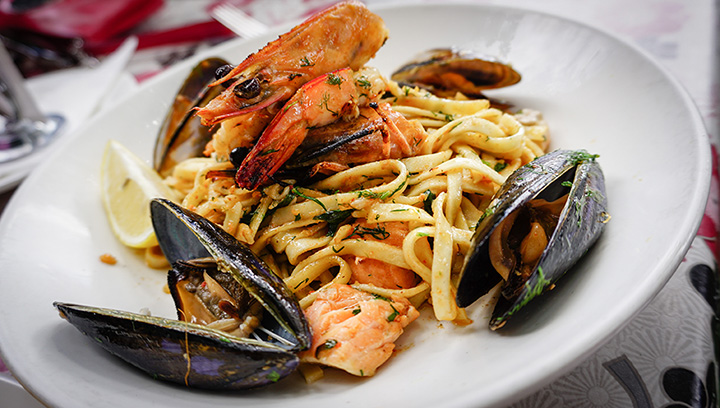 Blessed with miles of coastline between Long Island and Manhattan, it’s no surprise that fishing—and, subsequently, seafood restaurants—are so popular. From casual waterfront fish-and-chips joints to an oyster bar on a sailboat docked in Tribeca, seafood lovers have a healthy variety of restaurants to choose from. Here are 10 of the best seafood restaurants in the Empire State.

Located on Montauk’s fishing docks, this family-owned restaurant is a local landmark. Try the lobster roll or the chowder, sit back, and watch the fishing boats come into the harbor with the day’s catch.

This clean, classy, New England-style fish market and restaurant draws in large crowds for its fish tacos and its popular oyster happy hour, among many other delicious reasons.

Gorgeous and sophisticated, this New York City oyster bar is on the deck of a historic fishing boat on the Hudson in Tribeca, offering delicious seafood and incredible sunset views.

A dazzling cavernous space inside the also-dazzling-and-cavernous Grand Central Terminal, Oyster Bar has been hosting its delicious oyster happy hour and a diverse seafood menu for over a hundred years.

This casual seafood spot has been a Hamptons hotspot for years. Expect an array of fresh-off-the-boat seafood like halibut, swordfish, and tuna, as well as comfort food classics like fried clams and lobster rolls.

Harvest on Fort Pond is a beautiful restaurant in the heart of Montauk, serving up large, Zagat-rated, family-style dishes on its garden patio. Much of the menu is sourced from local fishing boats, New York farms, and its own garden.

With its red, white, and blue décor and iconic sign that reads “LUNCH,” this roadside seafood joint constantly has a line stretching out the door. Fans stop by for the lobster roll, fish and chips, and assortment of shellfish.

This is the place in New York City to find New-England-seafood-shack charm, an awesome oyster happy hour, and an educational oyster app called the “Oysterpedia.” It’s no wonder Mermaid has gained such a loyal fan base.