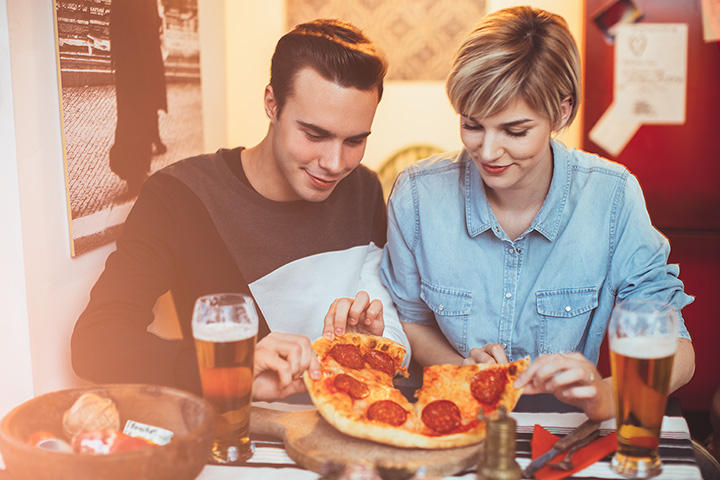 Sometimes an intense study session or an epic night out can only be interrupted by the prospect of amazing food. Whatever your midnight food cravings may be, you’ll find an eatery to satisfy near NYU. Here are 10 of the finest late-night food joints in the neighborhood.

Mamoun’s serves up classic, savory Middle Eastern fare like falafel and baba ganouj from its two locations near NYU—Macdougal Street and St. Mark’s Place. It claims to be the oldest falafel restaurant in New York, having opened its doors in 1971.

Open daily until 5 a.m., this late-night pizza place near NYU is a magnet for college students. Try the artichoke pie, which is made with artichoke hearts, spinach, cream sauce, and cheese.

“People are like artichokes - you have to do a little bit of work before you can get to their hearts.” ...and tbh that “work” involves pizza so ðŸ˜…ðŸ•âœ¨ // ðŸ“¸: @haute.coffee // #spoonfeed #spoonau #brainfoodnyc #spoonuniversity

It doesn’t get much more iconic than Katz’s Deli, which makes huge, meaty sandwiches made of slow-cured corned beef and pastrami. If you forgot to eat dinner before going out, don't fret—this deli is open late all week, including for 24 hours on Saturdays.

With multiple locations around the city, 2 Bros is the go-to spot for $1 slices of pizza. The St. Marks Place location is open until 1 a.m., making it an ideal choice for greasy food after the bars.

Open 24 hours a day since 1954, this Ukrainian diner serves its entire menu all night long. So, this is the place to go when you’ve got a midnight hankering for borscht and pierogis.

Late-night noodle hankerings are satisfied with a trip to Momofuku Noodle Bar. With a creative menu that changes nightly and a large fan following, this noodle shop will hit the spot on any given night.

mayan #prawns have made their way onto the menu at noodle bar nyâ€•served on a carrot puree with orange and sichuan peppercorns. swinging by for dinner.

A meat lover’s paradise, this iconic hot dog joint deep fries its dogs in oil and smothers them in all manner of rich toppings, including (but not limited to) chili, ham, mustard, and cheese. Its location on St. Marks Place and late-night hours make Crif Dogs a destination for the party crowd.

Saturday’s are for the dawgs ðŸ˜œ #grubgalz . . . . ðŸŒ­: An everything bagel with scallion & cream cheese style hot dog?! Sign us up for this Jon-Jon Deragon dog! Also catch us chillin Hawaiian style with this Tsunami hot dog, topped with pineapple & pickled onions!

Craving a late-night sugar rush? Big Gay Ice Cream Shop has you covered. Whether you choose a cup or a cone, sprinkles and chocolate dip come free every time, which is at least partly why there’s always a line out the door.

@biggayicecream is always the right choice after a win, loss, or 0-0 draw!

NYU students flock to this classic American diner, which features vinyl booth seating, an old-fashioned sign, and classic fare like burgers and fries. Best of all, this Greenwich Village restaurant is open 24 hours a day, seven days a week.

This Macdougal Street French fry shop specializes in all manner of fresh-cut fries, including savory toppings like garlic, cheese, teriyaki, and fruit chutneys for an excellent midnight snack.