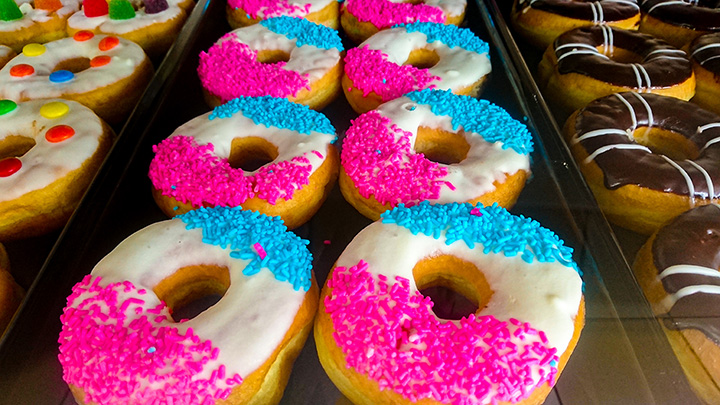 Whether they’re sugared, glazed, or filled, doughnuts will always have a special place in the hearts of New Yorkers.  From creative flavor takes to gourmet doughnut experiences, here are the 8 best doughnut shops in New York State!

A capital-region obsession, Cider Belly Doughnuts focuses on fresh, delicious doughnuts in flavors like cider, maple, and cappuccino. The café doles out doughnuts in quantities from one to a dozen.

Soft, moist, and fluffy, Dough Donuts have been a cult favorite in New York City since the bakery was founded in Bed-Stuy in 2010. Dough places an emphasis on flavor innovation, making varieties such as hibiscus, Nutella, and passion fruit, among others.

Doughnut Plant produces fresh, savory, organic-when-possible donuts daily from all of its colorful locations around the city. Expect cake, yeast, and filled doughnuts in flavors like banana pecan and peanut butter and banana cream.

Making what “could be the best donuts on the planet,” Donut Kraze pushes the envelope when it comes to creativity. The doughnuts are very light but packed with sweet and savory toppings, like bacon and strawberry cheesecake.

This New York City doughnut maker churns out delightful bite-size doughnuts with an emphasis on quirky flavor profiles. Buy a pack of six and mix-and-match as you please, choosing from flavors such as fruity cereal and pumpkin pie brulee.

Supported by a loyal following of Buffalonians, Paula’s is a household name in the region. The bakery serves up colorful, dense, and rich doughnuts in glazed, jelly, Bavarian, and angel cream, among others.

Simple, fresh, and old-school, The Donut Pub focuses on what it does best—the all-American classic doughnuts for reasonable prices. Try the chocolate caramel croissant or blueberry cake flavors.